This section of the Includator help shows how a programmer can make use of the include structure optimization algorithms provided by the Includator plug-in. The description includes information on how to trigger an Includator algorithm and on how the outcome is presented to the user.

Use the following links for a detailed description of a concrete Includator feature. Note that these descriptions are more detailed than the ones found in the sidebar of www.includator.com.

An Includator algorithm can be started in two different places. Either through the main menu-bar entry, which is visible when the C++ perspective is active. 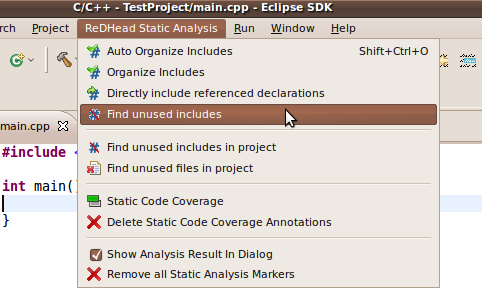 Or through the pop-up menu accompanying a source or header file or a C++ project in either the C++ Explorer, the Project Explorer or the Navigator Eclipse view. 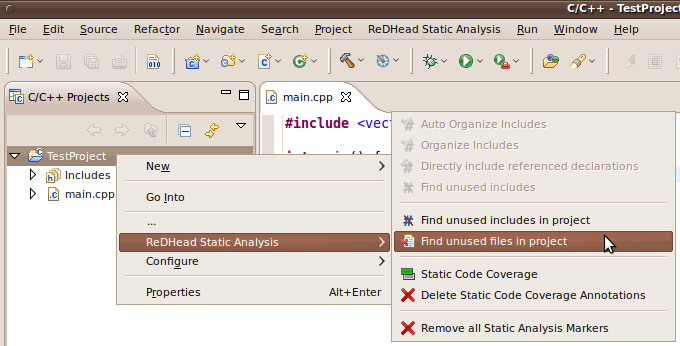 As can be seen in the sample screenshot, some of the algorithms can not be started on a project. These can only be triggered if the focus is either on a source or header file in the C++ Explorer, Project Explorer or Navigator, or inside of an open C++ editor.

As already mentioned, Includator algorithms produce suggestions that provide information on the given code. These suggestions will be visualized either in the Includator suggestion dialog or they will be shown in the C++ editor in the form of markers or annotations.

The Includator suggestion dialog will not show up when running Static Code Coverage or Auto Organize Includes.

Includator suggestion makers show up in the editor as normal markers with one of Includator’s icons.

Annotations are added to the editor when running Static Code Coverage on a C++ project.

After applying a quickfix on a document, the document will be adapted according to the current suggestion and the marker will be removed.

There are two ways to get rid of Includator’s editor markers (without applying them). To delete one or several specific markers one can use the the Problems view of Eclipse. 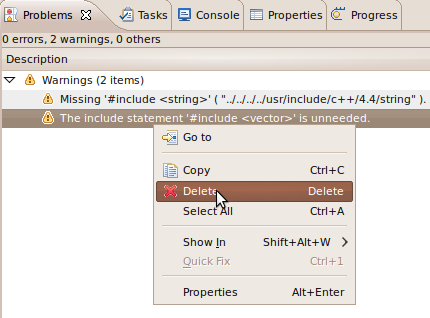 To delete all Includator markers, choose Remove all Static Analysis Markers from the Includator menu.In addition it is also possible to remove all static code coverage annotations from a project.